A long-time resident of Abbotsford has asked “… give me one specific thing you are fighting for that would make Abbotsford more attractive to businesses?” It’s a good question and I want to address it seriously.

Let me begin by briefly reviewing some notable recognition that Abbotsford has received in the last four years. In 2015, Abbotsford was recognized with the “Open For Business Award”, and the Fraser Institute recognized Abbotsford as the “Community With The Least Red Tape”. That same year, the Conference Board of Canada recognized Abbotsford as one of the fastest-growing economies in Canada. In 2016, the Canadian Federation of Independent Business ranked Abbotsford 9th in Canada as one of Canada’s “Most Entrepreneurial Communities”. In 2017, Abbotsford was recognized as “Most Business-Friendly City” in BC, by NAIOP, and in November of last year, REIN (Real Estate Development Company) announced that Abbotsford was the 2nd best city in British Columbia to invest in. All of these awards, and more, can be found at:

So I think it’s safe to say that Abbotsford has been attracting businesses in recent years. Can the city be more open or more “friendly” to new businesses? It certainly can.

Research tells us that 75% of growth in the business sector takes place in existing businesses, and only 25% is new growth. With that in mind, Economic Development Department has instituted “Business Walks”. Each year, local leaders, businessmen, and Council members target a specific geographic area, visiting businesses and engaging them in conversation around a set number of questions, which are employed each year. With time, the responses to those questions will provide the City with important data for informing the City’s strategies. More immediately, these visits provide opportunities for business owners to share specific challenges with us, and for the City to make them aware of resources that are available (eg business planning, or recruitment of skilled employees). This program has proven to be quite popular, and it will be continued.

Some business owners will argue that property taxes for business are too high; that a lower tax rate would attract business to Abbotsford. The fact of the matter is that presently, Abbotsford is among the lowest in the Lower Mainland/Fraser Valley. Abbotsford has been targeting a tax ratio of 2:1, however, due to the significant increase in property assessments in the last few years, the tax ratio has increased. Keeping the ratio at the lower level would have resulted in more significant residential property tax increases. The goal for the city remains to reach a ratio of 2:1. 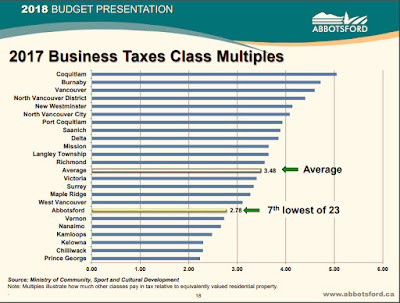 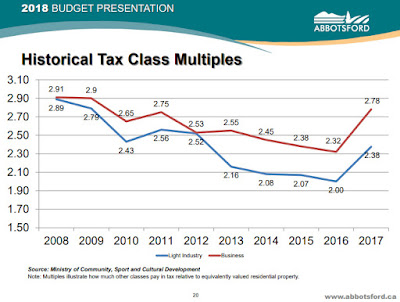 Recently, Abbotsford missed out on being chosen as home for the new Molson Brewery, which is now under construction in Chilliwack. While Abbotsford was their first choice, a parcel of land of the size required, on a railway line, was not available. Had the West Abbotsford Special Study Area been approved for exclusion from the ALR, the outcome may have been different. Abbotsford’s supply of available industrial land has narrowed to only very small lots, and they too will soon be claimed. Abbotsford boasts an enviable rate of 65% of residents who live and work in Abbotsford – the highest in the Valley/Lower Mainland. If Abbotsford hopes to provide employment lands for new businesses, its supply of industrial lands will need to be increased in the near future. So at the appropriate time, I will support a reapplication to the ALC for exclusion of Special Area B in West Abbotsford from the ALR.

Abbotsford is presently under consideration by Intelligent Communities Forum for designation as an "Intelligent Community", which would bring national and international attention to our city and its potential as a place to invest. "Technology is going to reshape everything we do", a presenter at UFV recently stated, and communities that embrace that thinking in their planning, will have greater ability to adapt to the coming changes. Abbotsford is on the cusp of significant physical and economic growth, and it needs to be managed to the best of the city's advantage.

One of the most important factors for potential investors and companies considering to locate in any given community is the financial health of the local government and its level of fiscal discipline. Their main concern is the security of their investment; they will shy away from communities in which local government is either unable or unwilling to steward its financial resources responsibly.

In the last six to seven years, Council has practiced fiscal discipline that reflects its understanding of this important principle. The nine recently-adopted Master Plans, which have financial plans on how to afford them attached to each, are the result of extensive community engagement and input. To throw that aside for some ad hoc projects at the whim of individual politicians would be fool-hardy and irresponsible. 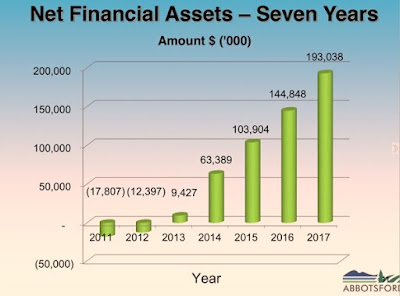 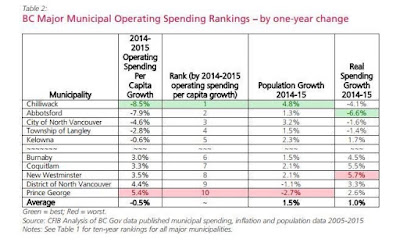 So back to the original question of what I would "fight" for. Fight may not be the word I would choose, but certainly words like advocate, defend, and promote would reflect how I feel about financial management exercised by Council in the last four years and the OCP, Master Plans, and Neighbourhood Plans recently adopted or in progress; about the achievements reached in terms of creating a more business-friendly government; and about the continued pursuit of innovation and application of technology in improving our community, both where and how we live, work, and play.