Tax Rates are Multipliers – Nothing More!

There are those who erroneously believe that a higher tax rate equals more taxes paid. That is simply incorrect. The plain truth is that tax rate is simply a multiplier. Each year, after Council sets the budget for the upcoming year, finance staff takes the combined assessed value of all properties in the municipality and divides the required revenue, as set by the budget, by total assessed property values, and arrives at a “Tax Rate”. It should also be noted that different rates are set for each of the tax classes (such as business or farm).

A good example to illustrate the flaw in using Rate as a comparator between municipalities would be a comparison between West Vancouver (the most expensive real estate in the province) and Cache Creek. I am using figures by the Ministry of Community, Sport and Cultural Development, 2018, and based on a “Representative House”.

The logic put forward by those who use Tax Rate as a comparator will be hard-pressed to explain the following, based on the 2018 provincial stats:

These names should be familiar to most, and most will also recognize that some of these represent very small rural communities, however, according to one blogger, Whistler and West Vancouver are to be held up as most desirable in the province with respect to property taxes, because they have the lowest rates.

The blogger in question argues that Abbotsford has the highest taxes, however, his argument on Tax Rate contradicts his position. Simply put, “Tax Rate” is a multiplier – nothing more; nothing less. Following the rationale of those who put Rate forward as a realistic comparator, Lumby, Cache Creek, and Gold River taxpayers would be much worse off than those from West Vancouver. Apart from the erroneous "Tax Rate" argument, the graph and table at the bottom quickly dispel the notion of Abbotsford's taxes being the highest.

The following graph and table are based on latest data provided by the provincial government, and clearly, Abbotsford does not have the highest taxes.The bar graph refers to cities over 35,000 population. 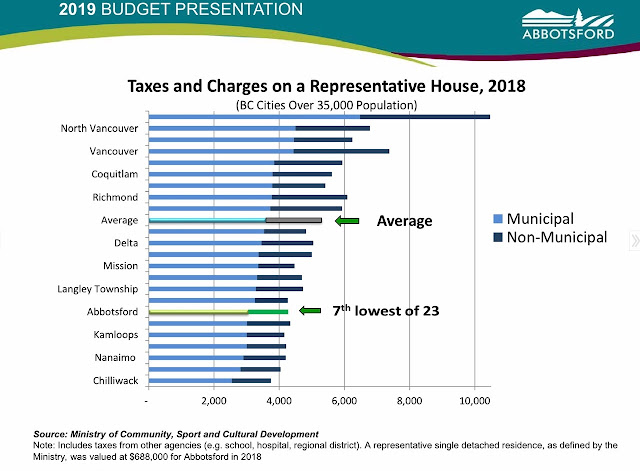 This table orders all our neighbouring municipalities, regardless of size, from highest to lowest in terms of "Total Property Taxes and Charges". 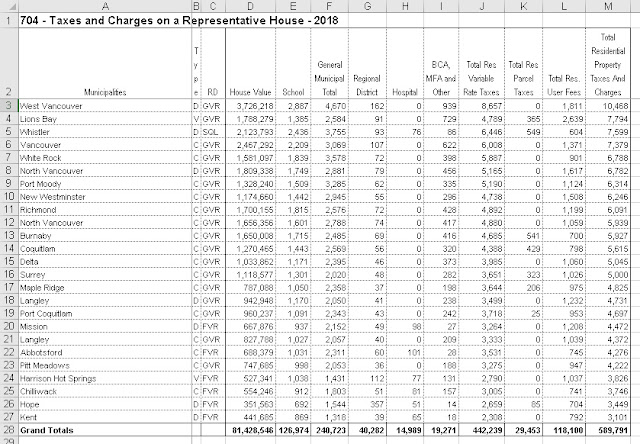 Posted by Dave Loewen at 1:11 AM No comments: