This week, Council had two applications, on their agenda, for subdividing existing lots into three and two lots respectively. The petitioning from existing neighbours in one of the applications was delivered with conviction and passion. Their fear is that these changes will change the character and stability of their neighbourhood in substantial ways, and a large number of residents from that street were in attendance at Council, to deliver that message. They urged Council to deny the application; to leave their neighbourhood as is. Several added that should the subdividing be approved, that Council not approve a secondary suite in these new houses.

As one Councillor faced with the sincere requests not to approve, I take no enjoyment in making a decision that may not agree with the request. My response to them was:

1. Abbotsford is growing at an increasingly fast rate. This year our city has experienced a record level of building permits (roughly $400M), and next year looks to surpass that mark.

2. Abbotsford is surrounded by agricultural land, which is protected by provincial legislation against future development.

3. Abbotsford has very little greenfield remaining for new development, and much of our non-agricultural land is comprised of slopes too steep for developing.

4. In light of these factors and the expectation of a growing population, our City adopted the Official Community Plan, 2016, which lays out a strategy for absorbing the next 60,000 people that move into our community. The Plan will drive 45,000 of those new residents into the existing urban core, and to that end, existing neighbourhoods with large-sized lots, need to be densified. One of the tools for accomplishing this is the subdividing of these large lots, and providing secondary suites wherever a minimum lot size is available, and assuming other conditions exist. (see figure below) 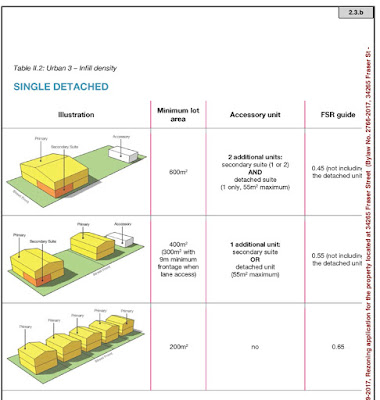 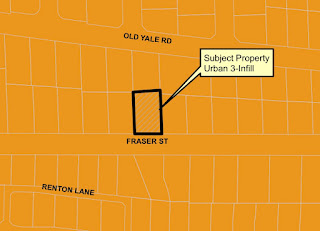 According to the policy adopted, one of the lots is large enough to subdivide into two lots, and with secondary suites on each.

To date, Council has approved numerous similar subdivisions throughout the city. Land owners are responding to market forces and to the flexibility that this new OCP policy provides them. The OCP went through vigourous community examination and input, and followed by careful staff and Council scrutiny, before adoption.

To arbitrarily allow one, while denying another, both of which qualify under the new guidelines, is not in the best interests of our community, and would bring the integrity of Council's decisions into question, unless of course, if making an exception could be defended for sound reasons. Making an exception in this case, could not be defended, in my opinion.