A number of years ago, the Abbotsford Youth Commission initiated a "Student Shadow Project" for local high school students who are part of their Youth Leadership Council. This program has continued annually, and provides young leaders an opportunity to obtain a better understanding of how local government works. The program is voluntary, on the part of City Councillors, and runs for about four months each year. Most have one student shadow, while occasionally, a Council member may agree to having two. This year marks the fourth and last year for one student, who will be graduating from high school.

Depending on student schedules, Councillors invite their shadow student to attend meetings or events that they are involved in. This year, the Youth Commission organized a forum, to which Mayor and Council were invited. We were divided into four table groups and spent half an hour at each table discussing city issues suggested by the students as important in their opinions. At the end, the collective comments were presented by student table hosts to the entire group, with the summaries forwarded to our City Planning Department. I think I can speak for the Council when I say that we were very impressed with the way in which the forum was organized, and with the articulate and thoughtful discussions around the tables.

Yesterday, as is the case each year, the "Project" came to a conclusion with the student shadows joining their Council partners at the Council table for our regular Executive meeting. The previous Friday, we had met to review the agenda and to provide some orientation for the students as to what they could expect at Monday's meeting. At yesterday's Executive meeting, several students felt free to ask questions of staff regarding various agenda items.

We followed the meeting with a pizza meal and debriefed the meeting just completed. In discussion with my student shadow, it is clear that this program provides an invaluable insight of local government that most students don't enjoy. My student told me he was looking forward to voting in this fall's municipal election, and if that's all we accomplished, it was well worth it. Educating the public about local government and how to become involved is important, and elected government officials have a role to play in that. 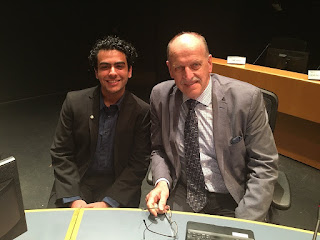 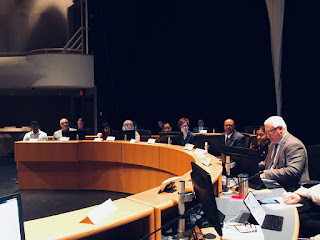