Equipping City Staff To Be Forward-Thinking

The City of Abbotsford says it paid a “futurist” $8,000 for an October speech to council and staff on how a changing world is affecting municipalities.

Nikolas Badminton, who calls himself a “researcher and futurist speaker” on his website, spoke for about 50 minutes, then took questions from an audience of about 50 city employees and councillors in Matsqui Centennial Auditorium on Oct. 26.

The presentation, which wasn’t open to the public or media, is understood to have included prognostications about the future, and touched on how automation, the green energy revolution and changing feelings about urban environments could affect the future of cities like Abbotsford over the coming decades.

Coun. Dave Loewen, who tweeted about the presentation, told The News this week that presentations like Badminton’s are one way large organizations like the city can encourage change and become less stifling

“Change, today, is occurring at an increasingly rapid rate, and for local government to continue to be responsive to needs of residents and to be as financially efficient and effective as possible is a challenge,” Loewen wrote. “Presentations like Nik Badminton’s plant seeds in the minds of city staff … Anticipating change is a cultural shift that the workforce needs to adopt, if it has not already done so." 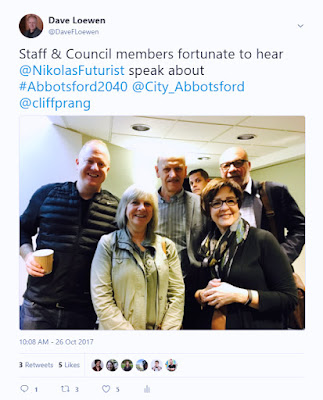 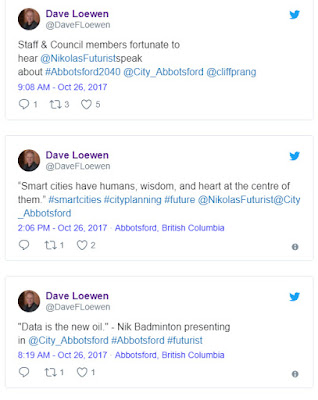 One city employee described much of the presentation as “underwhelming,” and cast a skeptical eye on the ability of prognosticators to accurately predict the future. But the employee said other parts of the speech touching on more tangible changes to real-life technology were more useful.


In a written statement, city manager George Murray said the presentation was tied into Abbotsford’s Plan200K process that includes the creation of 20 new plans and studies, including new neighbourhood plans, an affordable housing strategy, and master plans for the city’s parks, transportation, water, sewer, transit and fire services.


“As a part of this process, and also to help all of our staff at the City of Abbotsford with considering how we will deliver services to our community in the future, the City invited futurist Nikolas Badminton to speak to all of our staff on some of the key considerations for the future of municipalities,” Murray wrote.


“We also invited some of our community partners and stakeholders to participate in watching this presentation and also recorded it so that it is available for staff to review whenever they need.”


Badminton’s website says “He cares about your event, helping you create an amazing experience, and creating a compelling keynote for your attendees to get excited and fired up about. It’s a collaborative approach.”


Asked if The News could see the video, city staff pointed to Badminton’s YouTube channel, which includes several of his speeches.